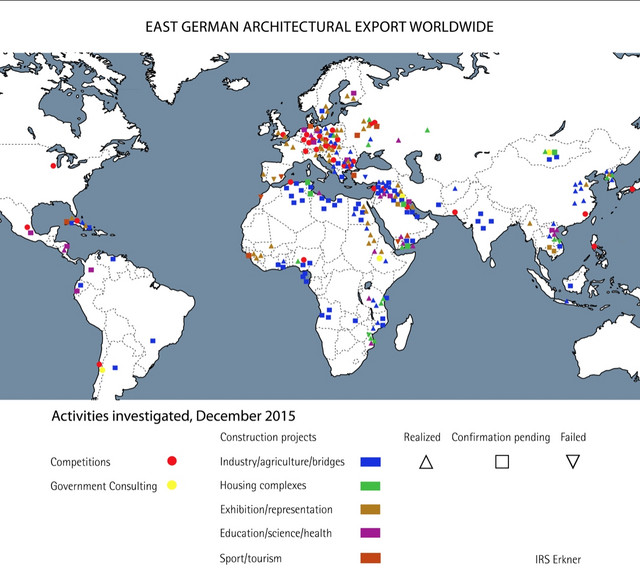 Since antiquity, the spread of regional and later also national architectures is a process of fundamental importance in cultural history. The global expansion of the 20th century Modernism is certainly its peak. While more and more architects from Africa, Asia and Latin America came to study in Europe and the political divisions between East and West arose, multifarious transfer processes overlapped and intertwined. In this context, after World War II, architecture became an important signifier of competing concepts of modernisation and new national identities in the henceforth so called „Third World“.

On this background, the researches of the Department for Historical Research at the Leibniz Institute for Research and Society and Space (IRS Erkner) started in October 2016 the investigation on the presence of the East German architecture abroad. The project focusses on the question to what extent the architects from the GDR – a country whose building practice was increasingly shaped by the principles of industrial prefabrication – have played a part in regional contexts, structures and construction methods. This implicates the issue of possible freedom of action for the planners in creative transfer and fusion processes.

Until the end of the global political and economic conflict in 1990, architectural achievements played an extremely important part in the self-portrayal of competing systems. However, our research project ties also in with the current research that extents the depiction of conflicts by the analysis of the different forms of cooperation between the East and West.

On the basis of numerous projects, researchers are investigating the dimensions and models of socialist architectural „export“ and interdependencies with the development in the West Germany. First step is the broad compilation of objects (designs, buildings, city planning) around the world. Furthermore, we conduct the analysis of formal principles, local adjustments and conflicts and the consequences of the foreign projects on the building practice in the GDR.

After WW II, architecture was used and misused as an ideological signifier for competing systems and for new national identities. Diverse actors and networks took part in architectural exchange within the blocks and beyond the Iron Curtain. Different aid projects posed an attempt to overcome political and economic divides, but at the same time they were often considered as foreign imposition or neo-colonial practice. Tensions between commercial interests and solidarity arose. The conference investigates the multi-layered and multi-centred exchanges between the Global South and socialist as well as capitalist countries relation to architecture and constructing industry from an interdisciplinary perspective. The Call for Papers is open until December 20, 2017. more info