Research leads to findings that are communicated to practitioners through knowledge transfer. However, research often also takes place directly with practitioners, together with initiatives or local organisations and with a focus on concrete problems. Knowledge transfer takes place in both directions: From practice to research and vice versa. In several projects, the IRS conducts practice-oriented research on socially innovative problem solutions in rural areas.

In the recently concluded Innovative Training Network “RurAction", researchers from seven European countries investigated the conditions under which social enterprises can contribute to the development of social innovations and thus to the development of rural regions. The ten Early Stage Researchers (ESR) of the network worked individually on their doctoral projects. In addition, they each spent time in social enterprises in rural Europe: for example, in a local development agency in Portugal or a cooperative for stevia cultivation and marketing in Greece. In this way, they learned about the challenges on the ground and complemented their research work with a practical qualification. Conversely, the companies participated directly in the emergence of new scientific knowledge. Jamie Baxter and Sune Stoustrup were based at the IRS as ESRs.

Based on empirical analyses, RurAction was thus able to close a research gap at the interface between social innovation research, social entrepreneurship and rural development. At the same time, recommendations for action for the municipal, regional and subnational (Länder), national and transnational (EU) levels were derived on the basis of the results. The most important finding, which was noted in the RurAction Policy Paper "How to promote social innovations in structurally weak rural areas" (IRS Dialog 5/2020), among others, is that social innovations in rural areas take place in typical phases. In these phases, they are confronted with specific challenges and can be supported by policy in a correspondingly phase-sensitive manner.

While the aforementioned policy paper is aimed at political decision-makers, the "Handbook for Practitioners" (IRS Dialog 6/2020) targets social enterprises, helping them to reflect on their role and strategies in rural regions. In addition, a 30-minute documentary film produced by Łukasz Rogowski and Michał Sita as well as a digital exhibition pursue the goal of making the potentials of social enterprises in rural areas even more visible. Over the course of five regional policy roundtables and one policy roundtable at the EU level, there were also intensive discussions about possible funding strategies – including with representatives of the European Commission's Directorate-General for Agriculture and Rural Development (DG AGRI) and Directorate-General for Regional Policy and Urban Development (DG REGIO), who received the project results with great interest.
RurAction (2016-2021) was funded as a Marie Skłodowska-Curie Action from the EU's Horizon 2020 research programme and coordinated by Gabriela Christmann. It involved nine research institutions and six social enterprises.

In a much smaller project, the need for advice from state politicians provided the impetus for research and for a dialogue process that is now ongoing. In 2020, the IRS was commissioned by the State of Brandenburg’s Ministry of Economic Affairs, Labour and Energy (MWAE) to compile an overview - including a mapping - of the status, development prospects and funding needs of social enterprises in the state. The focus of the study “Marktorientierte Sozialunternehmen in Brandenburg” (Market-Oriented Social Enterprises in Brandenburg) was on enterprises that generate income by positioning novel products, services and business models and thus pursue a social or ecological agenda. One result of the study was that the perception of social enterprises as important actors in shaping rural areas could still be improved. The authors therefore recommended, among other things, a dialogue process between actors in politics and administration and social enterprises. The MWAE is now following this recommendation by organising three in-depth discussions with social enterprises and representatives of the state of Brandenburg starting in May 2021 together with Social Impact gGmbH, which was also involved in the preparation of the study. Ralph Richter and Ariane Sept will take part in these discussions as experts. At the end of the dialogue process, a roadmap with measures for improving the situation of social enterprises in Brandenburg, taking into account the recommendations for action made in the study, should be available.

Other projects focus on supporting the organisation of innovations and at the same time scientifically substantiating and classifying them so that experiences from individual projects can be generalised and transferred. The IRS takes on this role in the “Innovationsbündnis” (innovation alliance) “region 4.0”, for example. The alliance supports problem-centred innovations in the Barnim and Uckermark regions in north-eastern Brandenburg and in the Uecker-Randow district in Mecklenburg-Western Pomerania (in its old borders). It addresses the fields of action agriculture and nutrition, services of general interest and infrastructures as well as nature-based tourism. Civil society participation formats in the region play an important role in the innovation alliance: a "Machbarschaftstag" (feasibility day) focused on the establishment of coworking in rural areas. A "Future Day" with young people focused on ways to secure skilled labour. And a German-Polish "RegioHack" looked for solutions to various challenges in the German-Polish border region between Eberswalde and Szczecin - for example in the areas of housing, work and entrepreneurship. These formats were developed from the region in a problem-centred way and implemented by incorporating knowledge from outside, for example from universities. Following the feasibility day, a coworking space was actually founded in Pasewalk.

Other results were further developed in workshops. Local leaders (e.g. mayors) contributed their experiences to the analysis of the innovation environment in a virtual focus group discussion on opportunities, experiences and barriers of regional innovation and development processes. In this way, first approaches to solutions were developed and possibilities for connecting the results were pointed out. The virtual format of the focus group reduced participation barriers and facilitated participation. Peter Ulrich is working on region 4.0 at the IRS.

The project is funded by the WIR! programme of the Federal Ministry of Education and Research (BMBF) and coordinated by the Eberswalde University for Sustainable Development.

The project “Open Region: Regional Challenges as Starting Points for Innovation” investigates and develops new formats of knowledge transfer from universities and supports problem-centred innovations in South Brandenburg. It helps to identify opportunities for innovative solutions in the region and to focus on their users. In this way, it follows the strategic concept of the "Open Region" developed in the IRS, which is being systematically put into practice for the first time in this project. In order to identify previously ignored opportunities for innovation, the expertise of citizens is brought together with scientific expertise. "Innovation Salons" are an event format with which the project team, consisting of Suntje Schmidt and Julia Stadermann, pursues this goal. Innovation Salons do not generate final solutions. Instead, they open up new perspectives on problems and bring together people who were not aware that they shared a common problem perception and solution competence. In its current form, the format has two stages: In the first salon, the participants jointly define and concretise the respective challenge or problem situation. In a subsequent salon with predominantly the same group of participants, external technical and process expertise is then included in order to develop model solutions together. In this way, not only are innovative approaches to solutions supported, but at the same time the transfer of knowledge between regional actors and university staff is expanded.

The first Salon Tandem took place in the first half of 2021. It addressed solutions for medical care in rural areas using the example of the municipal health house in the small town of Baruth/Mark. In addition, comparable initiatives and institutions as well as researchers and transfer staff from regional universities were represented. During the first salon session, they prepared a challenge analysis and identified potentials for overcoming them. In the second salon session, they worked on three selected potentials in more detail and developed project outlines on their basis: to supplement the health house with mobility concepts; to integrate digital solutions into the health house concept; and to locate the health house in new funding contexts beyond the health sector, for example sustainability. In addition, new networks were created between the participating institutions. Two more Innovation Salon tandems are being planned.

The project is part of the “Innohub13” network of the Technical University of Applied Sciences in Wildau and Brandenburg University of Technology Cottbus-Senftenberg. It is funded by the BMBF programme “Innovative Hochschule” (innovative university). 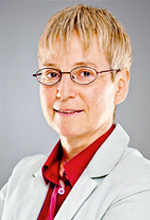