The transport and logistics sector is a problem child of climate protection. For a noticeable reduction of its greenhouse gas emissions, new, sustainable concepts are needed that go beyond individual e-mobility and effectively reduce traffic flows. However, such concepts have so far been discussed mainly in the context of urban centres; suburban and rural areas have received too little attention. A project network with the participation of the IRS has therefore comparatively investigated in an urban and a suburban neighbourhood under which conditions people accept and use novel solutions in urban logistics and transport.

For years, the transport sector has lagged behind in climate protection. While other sectors have noticeably reduced their greenhouse gas emissions, transport emissions are at the 1990 level and only fell slightly as a result of the Corona pandemic, as the Federal Environment Agency announced in October 2021. People in "car country Germany" are finding it difficult to come up with alternatives to private motorised transport. The rise of online shopping and parcel deliveries with emission-intensive vans also contributes to the persistently high emissions. What are the reasons for the low willingness to change behavior in mobility and logistics? When investigating the causes, specific local conditions come into focus: Distances that have to be overcome and the different endowments of different spatial types - inner-city, suburban, rural - with transport infrastructures influence the chances for a shift towards ecological alternatives. However, research has so far taken too little account of these spatial differences. The mobility and logistics shift towards sustainable forms of transport and delivery has so far been studied mainly with a view to metropolises and large cities.

The research project "Stadtquartier 4.1" addresses this research gap by comparatively investigating the social acceptance and use of sustainable transport and logistics solutions for an urban and suburban area. In concrete terms, this involves sharing solutions for cargo bikes and alternative delivery systems such as open-supplier parcel stations, which are intended to reduce delivery traffic on the "last mile". The urban Mierendorff Island in Berlin-Charlottenburg (the name refers to the island location between the Spree River and the Westhafen Canal) and the small town of Erkner from the suburban belt around Berlin serve as case studies. In addition to belonging to the metropolitan region of Berlin, both areas have a comparable number of inhabitants (about 15,000 people live on Mierendorff Island, 12,000 in Erkner). However, the spatial, settlement structure and infrastructural conditions are different. High population density, Wilhelminian-style perimeter block development and excellent public transport access are characteristic of the urban quarter, while low density, a mixture of single-family and prefabricated housing and a car-centred infrastructure are characteristic of the suburban quarter. Since May 2020, the project team has extensively studied both areas, including walk-throughs, exploratory interviews, media analysis, and representative household surveys.

Above all, the results of the standardised household surveys allow a systematic comparison between the two areas. And it is striking that the two neighbourhoods differ even more from each other than we had already suspected. To put it bluntly, the urban district is already in the midst of the transport transition, while the municipality in the suburban area is still at the beginning of this change. The differences in the importance of the car are impressive. While 43.6% of all trips in Erkner are made by private car, this figure is only 18.0% on Mierendorff Island. In the suburban quarter, there is an average of 1.17 cars per household, in the urban quarter only 0.54. The importance of the private car for many people in Erkner is summed up by one respondent: "Nothing works without a car!"

Further findings suggest that the socio-ecological transformation meets with greater resistance in suburban areas. For example, the social acceptance of sustainable transport and logistics solutions such as open-supplier parcel stations or cargo bike sharing is noticeably lower in suburban areas than in urban quarters. The willingness to forego emission-intensive doorstep parcel deliveries in favour of non-motorised self-pickup at parcel stations or parcel shops is also significantly lower in Erkner than on Mierendorff Island. When parcels are picked up by oneself, it is by car in half of the cases (compared to 15% motorised parcel pickup in the Mierendorff neighborhood). While parcel stations in Berlin-Charlottenburg reduce traffic and emissions by replacing doorstep deliveries, significant rebound effects occur in Erkner. Parcel stations designed to reduce emissions have an opposite effect and generate more traffic. Our studies show that the recipes for sustainable mobility and logistics cannot be easily transferred from inner-city districts to suburban areas.

But how can the less sustainable transport and logistics behaviour of people in Erkner be explained? Roughly speaking, individual and structural explanations can be used. While the former focus on individual attitude patterns or cost-benefit considerations, from the latter perspective supply structures and societal orientation patterns are decisive. We find evidence for both sets of causes and argue that differences in transport and logistics behaviour result from an interplay of specifically urban and suburban attitudinal patterns and routines on the one hand and structural opportunities and constraints on the other. Of course, this does not relieve either institutions or individuals of the responsibility to strive for more environmentally sound transport and logistics behaviour.

At the individual level, the differences between the urban and suburban survey areas become apparent in the form of differences in attitudes: residents of Berlin-Charlottenburg are much more in favour of environmental protection in general and the need for a change in traffic patterns in particular than people in Erkner. In the Berlin study area, almost one in two people is unreservedly in favour of a reduction in car traffic, while in Erkner less than one in three is. It is not necessarily the case that lower environmental attitudes causally explain greater car use, but conversely that an automobile lifestyle can lead to weaker environmental attitudes. The sociologists Marco Sonnberger and Matthias Leger from the University of Stuttgart have coined the bon mot for this observation loosely based on Marx: "It is not car use that determines being a car, but rather being a car that determines car consciousness.”
As shown above, however, it would be too short-sighted to hold the residents of the suburbs alone responsible for a poor environmental balance in transport and logistics behaviour. Structural conditions make it difficult to cultivate equally sustainable transport behaviour in Erkner as in Berlin-Charlottenburg. Non-motorised parcel pick-up is easier to do at the parcel shop around the corner than at the parcel station three kilometers away. It is easier to avoid driving to work with a subway station within walking distance than with hourly buses. These examples point to a further insight, namely that for most people the use of transport is a means to an end rather than the end itself. If mobility occasions and places can be easily reached and connected by active transport - walking or cycling - or by public transport, people are more likely to avoid using their cars. Planning is faced with the task of linking important functional areas such as housing, work, leisure, shopping and public services in such a way that they can be easily reached by environmental transport. In most suburbs, however, the situation is more like that in Erkner. The workplace is in the nearby metropolis, the doctor and hairdresser in the local centre, the food markets are on the major arterial roads and the nearest DIY store is in the neighbouring town. For most people, a time-efficient lifestyle is only possible by car.

What can be done to promote the necessary mobility turnaround in suburban areas as well? In addition to the bundling of functional areas, there is a great need to catch up on the expansion of sustainable alternatives. Buses must run more frequently and also during off-peak hours. More safe spaces need to be created for active transport. For transport researchers such as Lisa Ruhrort from the Social Science Research Center Berlin, however, such incentives are not enough to achieve the switch to public transport and the ambitious reduction targets in the transport sector. In addition to "pull" measures, which increase the attractiveness of the eco-modes of transport, there must also be "push" elements to make car traffic more expensive. Or, as sustainability researcher Daniel Hausknost from the Vienna University of Economics and Business puts it: "We have to close doors so that others can open."

The project "StadtQuartier4.1 - Development and Practical Implementation of Flexible Neighborhood Hubs in the Berlin-Brandenburg Metropolitan Region" is funded by the Federal Ministry of Education and Research (BMBF). In addition to the IRS, LogisticNetwork Consultants GmbH (LNC), the Fraunhofer Institute for Production Systems and Design Technology and insel-projekt.berlin UG are involved in the network. 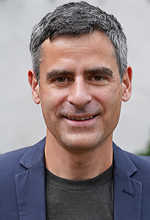