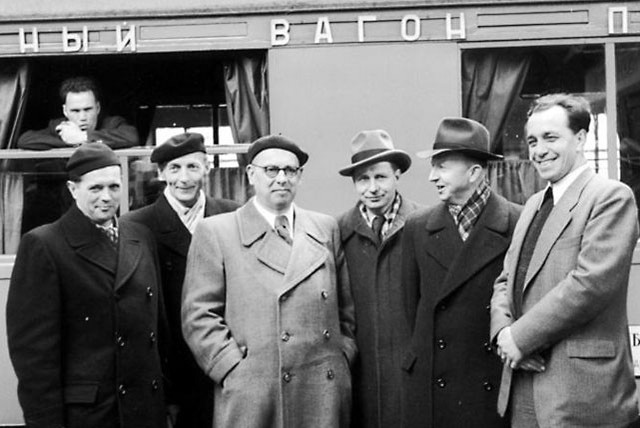 This sub-project is being carried out as part of the project "Experimental Housing and Urban Development. Building and Planning under National Socialism. Preconditions, Institutions, Effects" of the BBSR (project 11).

The foundation of the Ministry for Reconstruction in 1949, its prehistory and the transformations in the 1950s can be taken as a starting point to establish the complex references to the traditions of planning and building in Germany, to the immediately preceding Nazi period and to international contexts of system competition before and after 45. In doing so, this research project will focus on the decisive course-setting and paradigm shifts, the traditional tension between decentralisation and centralism, and the question of ruptures or continuities, embedded in the international context of societies of modernity in the 20th century.

Photo:
In 1950, a delegation led by the Minister for Reconstruction of the GDR, Dr Lothar Bolz, travels to Moscow to study Soviet methods of urban planning and the reconstruction of destroyed cities in the Soviet Union.
Photo: Bundesarchiv, Image 183-S95476/CC-BY-SA 3.0, commons.wikimedia.org