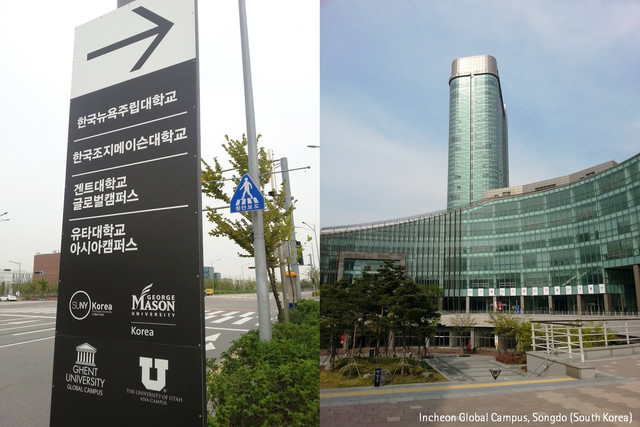 In the past twenty years, the number of students completing university studies in a foreign country has constantly been on the rise. In addition, many universities are investing in international branch campuses (IBCs) abroad. These are initial indices for a parallel globalisation of knowledge-intensive branches of the economy and of the university landscape. The Leibniz Junior Research Group “Constructing Transnational Spaces of Higher Education” (TRANSEDU) is concerned with the relationship between globalised economic processes and the internationalisation of the academic and research landscapes.

As part of the programme “Leibniz Best Minds”, the Leibniz Association funds Junior Research Groups, providing younger researchers with the opportunity to realise their own research and thus to establish themselves further in their field. The Junior Researchers lead a Junior Research Group of two to three doctoral students. The group “TRANSEDU”, whose funding was secured in Winter 2017 by Dr. Jana Kleibert, is researching the particular development dynamic of the globalisation of the university landscape. This concerns, for example, the novel spatial forms of IBCs, which have in part developed from single campuses into “Education Cities” (i.e. integrated university cities). In addition, a series of new actors and regional focus areas have become visible. European universities have also become increasingly active in this field, with the current focus seeing a shift from the Middle East to Asia. Neither the political and economic backgrounds of these developments, nor their implications have to date been systematically researched.

IBCs are conceptualised by the IRS research group as crystallisation points within the process of globalisation, and will be investigated at various levels in human-geography oriented research work. These levels will encompass both the emerging global university network and instances of territorial embedding in concrete locations. The individual doctoral studies will focus on the transformation of European universities' internationalisation strategies, the embedding of IBCs in national and urban development strategies, and the emergence of transnational mobilities and knowledge within the transnational Education Cities in the Gulf states and south-east Asia. Network-centred and territorial analyses will be used in the studies in order to understand both the new international education spaces' embedding in networks as well as their mooring in local and regional contexts.

The three doctoral researchers began their work at IRS in May 2018 under the leadership of Dr. Kleibert. Additional project partners are Prof. Dr. Neil Coe from the National University of Singapore and Prof. Dr. Bas van Heur from the Brussels Centre for Urban Studies at the Vrije Universiteit Brussel.

News
New Policy Paper: How to Decide on Investments in University Offshore Campuses

Universities are increasingly investing in offshore locations, partly to generate revenue in the form of tuition fees, partly to achieve reputational gains. There are currently almost 500 offshore campuses worldwide. At the same time, campuses are also being closed every year. The Junior Research Group TRANSEDU, headed by Jana Kleibert, investigates the internationalisation strategies of universities. Under the title "Strategy First: Ten Questions to Answer before Starting an International Campus", Jana Kleibert, Tim Rottleb, Marc Schulze and Alice Bobée have now presented a policy paper that addresses university leaders and political decision-makers and analyses the risks of international campus developments. more info