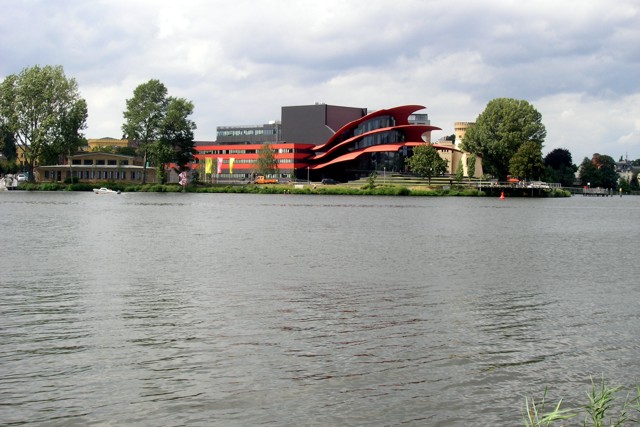 Cities create approximately 70% of all greenhouse gas emissions while at the same time being substantially impacted by climate change. Especially extreme weather occurrences like torrential rain fall, flooding, and heat waves often result in costly property damage, which in result – caused by inept behaviour in dangerous situations and insufficient preparation – often have an adverse effect on citizens’ health. The BMBF research project “Urban Resilience Towards Extreme Weather Incidents – Typology and Transfer of Adaptation Strategies in Small Metropolises and Medium Sized Cities” (ExTrass) aims to measurably strengthen the resilience of cities and towns by working closely with administrations, branches of civil protection, and residents.
Cities are important actors as well as a target group for climate policy due to their high emissions, but also due to the high risks and dangers caused by climate change. Early research of communal strategies for climate protection and climate change adaptation shows that such planning is more common in cities of more than 500,000 inhabitants than in smaller cities and towns. Smaller independent urban districts in Germany possess the same legal space of action as big cities, yet often far fewer resources. ExTrass thus concentrates its efforts on cities of 50,000 to 500,000 residents.
In the first phase, the project is set to create an overview of relevant activities by smaller cities and larger towns, looking particularly at the areas of climate change adaptation, risk communication, and climate protection. Taking into account their past damage experiences as well as their current risks, ExTrass identifies the pioneers as well as the latecomers and describes the specific paths of their development. Applying path-analysis concepts, both the barriers and drivers toward progress will be described. Furthermore, three case studies will explore the potential for transfer and further development of successful measures, each dealing with a specific set of adaptation challenges while working under a specific institutional framework. The second project phase will discuss these findings with experts from academia as well as practitioners in the field to further develop successful measures and ideas as well as to implement and test them in case studies.
The IRS is responsible for the sub-project „Path analysis and transfer potential in case study cities”. One case study will explore the climate and energy politics of Potsdam city. Furthermore, included with this work package, is direct support and advice to Potsdam on how to implement the “Masterplan Community” programme. This initiative – funded by the federal government – supports its participants in realizing carbon neutrality by 2050. The analysis conducted by IRS will not be limited to the municipal level, but will also encompass the dynamic relations between the city of Potsdam, the state of Brandenburg and the federal government. Against the backdrop of studies from abroad (e.g., Amsterdam, Malmö) which were part of a recently concluded EU project, the central question will be how “upscaling” of local experiments works. The research questions are as follows:
• Whether and how and local experiments and new climate adaptation policies transfer to different neighbourhoods in Potsdam? (experimental upscaling);
• Whether Potsdam adopts local experiments from other (German) cities and how Potsdam learns from them? (horizontal upscaling);
• Whether and how Potsdam gets assistance from the state of Brandenburg or the federal government through programmes like the “Masterplan Community ” programme? (vertical upscaling) and
• Which regulations of the federal government or the state of Brandenburg, respectively, have influenced Potsdam's climate and energy policy? (hierarchical upscaling).