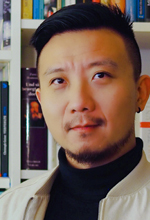 Charles Yan Guo joined the IRS in the Department “Dynamics of Communication, Knowledge and Spatial Development” as a guest PhD candidate since May 2017 with a European joint-doctorate (co-tutelle) convention from Istituto Universitario di Architettura di Venezia (University IUAV of Venice, Italy), together with Brandenburg Technical University (BTU Cottbus-Senftenberg, Germany).

After his diploma of architecture in China (Yangtze University, 2007, Summa Cum Laude), Charles came to Europe for his further studies in urbanism. He holds an M.Sc. in Urbanism and a postgraduate European Master in Urbanism (EMU) from Delft University of Technology (TU Delft) and Catholic University of Leuven (KU Leuven). Following the Great Sichuan Earthquake (2008), he initiated, coordinated and taught in an interdisciplinary design studio themed on Post-disaster Recoveries for Sichuan, at the Faculty of Architecture at TU Delft and Southwest Jiaotong University in China (2010). Since 2011, he started his PhD on the field of post-disaster urbanism at IUAV Venice. He has also been a guest tutor/lecturer at University of Padua, Keio University, Tongji University and Chongqing University. In 2012, he has guest-edited a special issue of Disaster and Urbanism for the International Journal of Disaster Risk Sciences with Beijing Normal University and Springer.