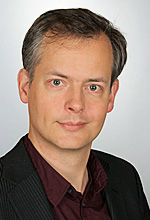 Kai Drewes was born in 1976 in Dar es Salaam, Tanzania. He studied Modern History, German Literature, and Media Sciences at TU Braunschweig and at Pécs University, Hungary. Having received his doctorate in 2011, he was granted the Award of the Foundation for Biographical Historical Research for his doctoral thesis about ennoblements of Jews in 19th-century Europe in 2014. He held scholarships from the German Academic Scholarship Foundation and the Leo Baeck Institute London as well as from the Leibniz Institute of European History in Mainz. A former research assistant at the university archive of TU Braunschweig, he was a trainee in librarianship in Osnabrück and Munich before becoming head of IRS Scientific Collections in 2013.