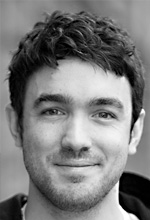 Tim Verlaan is assistant professor in Architectural and Urban History at Amsterdam's Vrije Universiteit, focussing on the urban renewal agendas of American and Western European cities during the post-war era. With support by the Thyssen Foundation, Tim stays at the IRS's Department for Historical Research from 15 May until 16 June 2017.

After finishing his bachelor degree in history at the University of Amsterdam (2010), he took a master degree in European urbanisation at the Centre for Urban History in Leicester and the Centre for Metropolitan Studies at the Technical University of Berlin (2011, with distinction), after which he wrote a PhD dissertation on the politics of redevelopment in Dutch cities during the 1960s and 1970s (2015). In the autumn of 2016, he was visiting scholar at Fordham University in New York.

Recent articles and book chapters investigate the experience of modernity in the field of urban planning, the planning history of Amsterdam's Bijlmermeer and a redevelopment scheme in the city of Utrecht. As an associate editor of the Urban History journal and a contributing editor of the Failed Architecture collective, Tim examines architecture and planning as products of contemporary political, economic and social conditions. He worked as a curator and adviser for multiple exhibitions, media outlets and advisory boards.