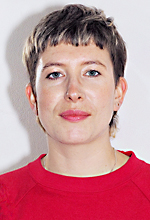 Since April 2022 Juliane Richter has been an associated doctoral student in the Freigeist project “Conquering (with) Concrete: German Construction Companies as Global Players in Local Contexts”, funded by the Volkswagen Foundation.

She is an art historian and journalist and is doing her doctorate in the DFG Research Training Group “Identity and Heritage” at the Bauhaus University Weimar on topics related to the transnational circulation of architecture and knowledge between the GDR and Cuba.

Her master's thesis, which focused on an inner-city prefabricated housing area in Leipzig, was published in 2015 and awarded the Theodor Fischer Prize by the Zentralinstitut für Kunstgeschichte, Munich. She volunteered at the magazine of the Association of German Architects “der architekt” and initiated and curated the arts and architecture festival RASTER : BETON in the large housing estate Grünau in Leipzig in 2016. Her interests include architectural history and theory in the 20th and 21st centuries, critical urban research, monument preservation and contemporary history.