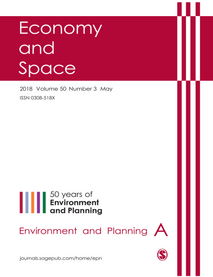 Leading the economy and society out of the carbon age into a climate-friendly future requires more than just a transformation of energy production towards renewable energy sources. As the current debate on a "Green New Deal", for instance, shows, there is a need for a fundamentally new way of productively using human labor, technology and investment capital. Geographical research can show how such transformations take place in space - how they are shaped by existing structures and how new things are created at different scales. Such a research perspective is developed in the new themed issue "New Energy Spaces" in the journal "Environment and Planning A: Economy and Space", which was developed with significant participation from the IRS. First research results, also in part from the IRS, are presented.

The two Guest Editors, Gavin Bridge (Durham University) and Ludger Gailing (IRS), bring together in this issue contributions that were first presented at a session of the 2017 Annual Conference of the Royal Geographical Society and the Institute of British Geographers (RGS-IBG). Their focus is on strengthening geographical perspectives in energy system transformation research, more precisely the perspective of a Geographical Political Economy. By this is meant a research perspective that goes beyond viewing energy infrastructures as physical-material installations distributed throughout space. Rather, it is interested in the unequal power relations embodied by energy networks, the uneven developments between different spaces that they foster, and the role they play in capitalist accumulation - the increasing concentration of capital in the hands of a few actors.

Such a geographical and critical perspective can reveal some aspects that are essential for understanding a "post-carbon" transformation: Old structures have a persistence - coal-fired power plants and highly centralized energy networks do not simply disappear. They limit the possibilities and the speed of change. At the same time, the new (for example, wind farms or more decentralized, regional supply structures) will not simply replace the old. Instead, the new and the old coexist and, through their combination, which in itself is new and unique, will shape the immediate future. This puts some spaces in a better position, for example in terms of economic value creation in the energy sector, and some in a worse position. Entirely new energy spaces are also emerging because the spatial organization of energy production, supply and consumption is changing. Dynamics of investment and disinvestment change the way profits are generated around energy production and consumption, how capital is accumulated, and which economic players and business models emerge as winners from the change. Finally, it becomes apparent that the new conditions of the energy system are negotiated in a conflictual way: For example, there are sometimes massive conflicts of interest between energy companies, local energy cooperatives, or larger cities striving for more independence and democratic control in the energy supply, and these conflicts are also carried out via the spatial scales of the energy system.

Two of the four articles in this issue are based on IRS research. Sören Becker (University of Bonn and alumnus of the IRS), James Angel (King's College London) and Matthias Naumann (TU Dresden and also alumnus of the IRS) deal with the question of how alternative energy futures in two metropolises present themselves in their article "Energy democracy as the right to the city: Urban energy struggles in Berlin and London". In both cities, initiatives - the "Berliner Energietisch" ("Berlin Energy Table") and "Switched on London" - are struggling to democratize the energy supply.

Ludger Gailing, Kristine Kern, Andreas Röhring (all IRS) and Andrea Bues (Potsdam Institute for Climate Impact Research and IRS alumna) trace the spatial dimensions of the German "Energiewende" in their article "Socio-spatial dimensions in energy transitions: Applying the TPSN framework to case studies in Germany". They refer to the TPSN approach, which is becoming increasingly popular in geography (the abbreviation stands for Territory, Place, Scale, Network). The authors show that energy system transformation is not only taking place in and across all four dimensions, as the theory stipulates, but that actors such as energy companies or local initiatives are pursuing strategies to actively shape these dimensions through territorialization, place-making, scaling, and networking, in order to shape the energy system transformation in their own sense. The power relations mobilized or challenged in this process are not yet found again in theory. Once again, therefore, the aspect of power is found to deserve more attention in geographical research on energy systems than it currently recieves.

New Energy Spaces. Environment and Planning A: Economy and Space 52 (6) 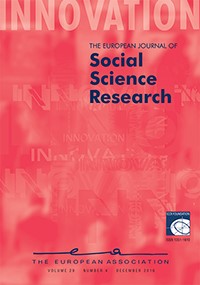 A new special issue of the journal “Innovation” guest-edited by Timmo Krüger (IRS) and Victoria Pellicer-Sifres (Universitat Politècnica de València) addresses power and conflict in societal responses to ecologic crises, particularly in efforts to transform energy systems, as well as approaches to study said responses. Ironically, given the remit of their publication outlet, the editors make clear from the outset that they believe innovation, more precisely social innovation, is not a concept that helps in understanding or advancing the necessary social and ecological transformations. Instead they point at alternative economic logics, such as degrowth, which do not promise alternative paths towards modernization and development, but rather alternatives to modernisation. The collection of eight articles emerged from encounters fostered by the Leibniz Research Alliance on Energy Transitions, and reflects the growing interest of transformation research, carried out at the IRS and elsewhere, in the idea of degrowth or postgrowth economies. more info