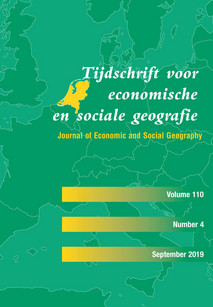 The spread of Covid-19 is a spatial phenomenon. Maps and statistics record the degrees of impact of different countries and regions, hotspots are identified and the influences of mobility practices such as holiday travel are critically examined. Thus, geography can make a significant contribution to understanding and combating the coronavirus pandemic. In a new special issue of the Tijdschrift voor Economische en Sociale Geografie, the guest editors Manuel B. Aalbers (KU Leuven), Niels Beerepoot and Martijn Gerritsen (both Universiteit van Amsterdam) have collected 26 contributions from different sub-areas of geography. The IRS is represented with two contributions.

Veren Brinks and Oliver Ibert ask in their contribution what the analytical value of the term 'crisis' is. They refer to the literature on crisis management in order to work out general characteristics of crises such as uncertainty, pressure to act and danger. At the same time, they also distinguish the concept of crisis from the concept of catastrophe: In a crisis there is always an opportunity. The worst case does not necessarily occur. Finally, crises also have a "performative" component: an event is named a crisis by actors in order to give it greater relevance. Taking the Covid 19 outbreak in Germany as an example, they then show what a spatial (in addition to temporal) perspective on crises can contribute. For this purpose, they use the TPSN concept (Territory, Place, Scale, Network) by Bob Jessop. This concept serves to analyse social phenomena along their territorial dimension, their manifestation at concrete places, their manifestation at different scale levels and their propagation in networks - but above all with regard to the interaction of these dimensions. Brinks and Ibert point out that different levels play into each other in the reactions to the spread of the new coronavirus: Concrete places, such as supermarkets, are transformed in order to prevent infection, while at the same time such transformations are organized in networks (chains) and differ according to network affiliation. Different territorial levels (federal, state, transnational entities) partly cooperate and partly come into conflict in the fight against pandemics, also depending on how a state is organised (federal or centralised).

Andreas Kuebart and Martin stabler also refer to the TPSN concept in their contribution. They evaluated the first 1000 or so cases of infection in Germany in order to identify the socio-spatial processes that have each caused infections. They identified three main dynamics: the influence of superspreading events such as carnival celebrations in the Rhineland, religious festivals or club parties in Berlin, on regional outbreak dynamics; the spread of the virus through mobility networks, especially tourism; and outbreaks in closed environments such as cruise ships and nursing homes. In contrast to the well-documented outbreaks of SARS and MERS in the 2000s, hierarchical spread (across closely networked metropolitan areas) did not play a role, nor did the spread in the area across municipal and district boundaries based on proximity. The particularly dramatic outbreak in the Heinsberg district, for example, remained limited to the district, commuter connections to other districts or across the German-Dutch border did not lead to a spatial spread of the infection. Kuebart and Stabler conclude from this that the closure of borders, which in the strongly interwoven European border regions led to severe disruptions of everyday life and also of cooperation in the fight against the pandemic, was not sensible. In contrast, regionally limited restrictions on mobility, the prohibition of events and restrictions on travel were adequate.

Verena Brinks und Oliver Ibert:From Corona Virus to Corona Crisis: The Value of An Analytical and Geographical Understanding of Crisis

Prof. Dr. Oliver Ibert
Dr. Andreas Kuebart
Coping With Crises in a Resilient Manner: The Role of Expert Advice in the Creation and Use of ‘Opportunities’ in Crisis Situations
Dynamics of Economic Spaces