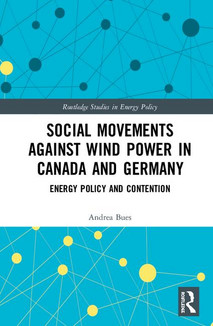 New wind-power projects have been a regular cause of local protest in recent times. But what determines whether resistance forms and how movements opposing wind power operate? Are only the local conditions and circumstances of particular projects decisive factors, or does the respective national context – such as political debate, or specific systems of regulation – also play a role? Andrea Bues has been examining this issue, comparing anti-wind movements in Brandenburg and in the Canadian province of Ontario. Her book “Social Movements against Wind Power in Canada and Germany: Energy Policy and Contention” has now been published by Routledge.

A decarbonisation of our energy systems is unavoidable if climate change is to be successfully combated. The German government plans, according to its climate-protection programme, to raise the proportion of renewable energy sources to 65% of gross electricity consumption by 2030. Wind power is a central pillar of this transformation. What happens, though, when it does not meet with acceptance at the local level? In many regions worldwide, the expansion of wind power has been accompanied by conflict. Andrea Bues is interested in the question of what differentiates the social movements against wind power in various countries, and why they have different degrees of success, even though they are directed at the same issue.

In order to examine this, she has investigated anti-wind movements in two pilot regions for wind-energy expansion: in Brandenburg and in the Canadian province of Ontario, which has the highest installed capacity of wind energy in Canada. Here, feed-in remuneration has been introduced after the German example, which has led to a swift expansion of wind energy. Nevertheless, a broad movement against wind power has arisen that has contributed to the end of political support for further wind-power development. In Brandenburg, too, an anti-wind movement has grown in recent years that has brought its concerns to wider attention through people’s initiatives and petitions. The positive attitude of the Brandenburg state government towards further wind-power development has nevertheless not been fundamentally shaken.

What are the differences in the two cases, and why was Canadian opposition to wind power more successful? What can one learn from a comparison of the cases in order to realise different kinds of energy transformation?

By means of on-site interviews, focus-group discussions, and document analyses, Bues identified factors that contributed to the differing outcomes in each case. Firstly, the existing regulatory systems (institutions) within which wind-power expansion was embedded, was central to the result of the respective wind-energy conflicts. In Brandenburg, for example, regional planning is fundamentally viewed as a local, participative process, while in Ontario the participation of local residents or affected communities has been overruled from the start by the government. This led to the greater vehemence, and thus to the greater impact, of the protests in Ontario.

A second factor is the variation in narratives (discourses) within which wind-power expansion in both regions is embedded. While energy transition in Brandenburg takes centre stage and is regarded as thoroughly positive, the development of wind energy in Ontario was swiftly associated with negative health effects – a positive narrative, such as that of “energy transition”, was not forthcoming.

These two factors – regulatory systems (institutions) and narratives about the development of wind power (discourses) – contributed to the movement against wind power in Ontario also receiving more political support than in Brandenburg, and thus of wielding altogether more power.

Several general lessons can be learned by comparing the wind-power movements in Brandenburg and Ontario. On the one hand, the institutional space in which the expansion of wind power takes places – such as the planning system – has a formative influence on the way in which debate about wind power is conducted. Out of this come consequences for the division of power in disputes surrounding wind power. On the other hand, the overarching narratives (discourses) surrounding the conversion of the energy system are central to achieving a decarbonised economy.

Dr. Andrea Bues is a member of the German Advisory Council on the Environment (SRU) at the Potsdam Institute for Climate Impact Research (PIK). She carried out the data collection and analysis on which her current book is based from 2014 to 2017, as part of her doctoral project “Scaling-Up Contention: The Power of Anti-Wind Movements and Sub-National Government Responses in Brandenburg, Germany, and Ontario, Canada”, while working at the IRS department “Institutional Change and Regional Public Goods”.

"Social Movements against Wind Power in Canada and Germany", Routledge