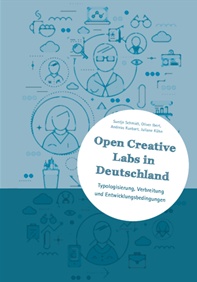 During the past decade we could observe the vast creation of open spaces dedicated to tinkering, experimentation, creative and freelance work as well as entrepreneurship primarily in Western, industrialized economies but also beyond. The scene of operators and users of such places typically refer affirmatively to a community culture in which manufacturing tools and digital technologies are flexibly accessible and knowledge and expertise are shared collaboratively among peers.

Mission statements claim that within the boundaries of such places the modalities of the economic logic is altered fundamentally: “We are reshaping the economy and the society through social entrepreneurship and innovation. Our communities are coming together to rebuild more human scale, networked, and sustainable economies to build a better world.” (Coworking Manifesto)

The emergence of Open Creative Labs can be interpreted in the light of more general societal processes:

The broschure is available in german language and can be downloaded through the project website.