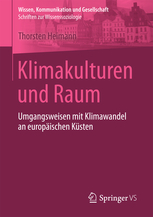 Ways of handling climate change vary worldwide. Differences can be observed in the perception of potential threats and opportunities as well as in the appraisal of adequate coping strategies. Collective efforts often fail not because of technical restrictions, but owing to social and cultural differences between agents involved. Consequently, there is a need to explore in greater depth those "zones of cultural friction” which emerge when agents deal with climate change. In this book Thorsten Heimann exermines, what kinds of “climate cultures” can be observed within European Coastal Areas, what the discriminants of different “climate cultures” are and/or how different climate cultures be can explained.

Heimann pursued two objectives. Firstly, there is the challenge of describing “climate cultures” in response to the last decades’ discourse of socio-spatial theory on cultural globalization, in which the congruence of place and culture is increasingly doubted. Several authors demand new theoretical and methodological approaches for exploring cultural space. Secondly, he sought explanations for climate-cultural differences, to which end he incorporates explanatory frameworks from environmental sociology, psychology, geography and anthropology.

Social-science debates on cultural globalization offer different positions concerning the constellation of current cultural space(s) worldwide. These positions range from the development of a “world society” (associated with cultural homogenization and deterritorialization) through to differentiation (persistent relevance of place and region). Consequently, we are in need for adjusted theoretical frameworks and analytical tools to be able to explore current constellations of cultural space(s). For social theory, Heimann developed the socio-theoretical concept of “relationaler Kulturraum” (“culture as relational space”). He used a concept of culture as “shared knowledge” (Reckwitz 2000) and grounds his work on social/communicative constructivism.

Heimann's study added certain aspects to the debate on cultural globalization. His empirical results give evidence to support theories both of homogenization and differentiation. On the one hand, we find similar forms of shared knowledge related to climate change across all European coastal areas; on the other hand, regional context variables like national affiliation also contribute to its discrimination. It is important to note that the structures of climate cultural constellations also depend on topoi chosen by the scientific observer.

The book derived from the doctoral thesis by Thorsten Heimann and is available in German.