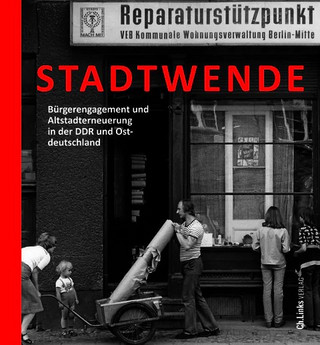 Large parts of the old building stock in the GDR were in a partly catastrophic condition in the late 1980s. The party and state leadership did not succeed in maintaining these old building quarters on a large scale, especially in the inner cities, and so their condition was perceived as a symbol of social and state decline. In the last years of the GDR, city dwellers fought against this decline by joining together in citizens' groups, mostly under the umbrella of the church or the Kulturbund. The work of these citizens' groups as well as other reform actors, their successes and the way they and the old cities were dealt with in the transformation period after 1989 are analysed in an anthology co-edited by Harald Engler and with the participation of other IRS staff members from the "Stadtwende" project.

In September 2022, the project volume "Stadtwende. Bürgerengagement und Altstadterneuerung in der DDR und Ostdeutschland" was published by Christoph Links Verlag in Berlin. The volume summarises the research results obtained within the framework of the project funded by the Federal Ministry of Education and Research "Stadtwende. Stadterneuerung am Wendepunkt - die Bedeutung der Bürgerinitiativen gegen den Altstadtzerfall für die Wende in der DDR" (Urban Renewal at the Turning Point - the Significance of Citizens' Initiatives against the Deterioration of the Old Town for the Turning Point in the GDR). The project was led by Harald Engler in the Contemporary History and Archives Research Area of the IRS and was applied for and carried out together with Technische Universität Kaiserslautern, Universität Kassel and Bauhaus-Universität Weimar.

The basic idea of the project was to investigate the work and significance of GDR citizens in the fight against the decay of old towns in the GDR. Before the fall of communism, there were about 20 groups in various cities of the GDR and East Germany, but during the transition period of the GDR there were more than 200. Due to the ban on private and non-governmental associations and initiatives in the GDR, these groups could only operate under the umbrella of the church or state institutions such as the Kulturbund. In addition to this movement from below, however, other actors in existing state institutions in the GDR also fought against the decline of the old town. These were building and planning experts who worked in the urban planning offices of cities, as well as employees of universities and research institutes such as the College of Architecture and Building in Weimar or the Institute for Urban Planning and Architecture (ISA) of the GDR's Building Academy. The work of both groups of actors, their partial cooperation, their success in preventing demolitions and ultimately their contribution to the peaceful revolution in autumn 1989 were analysed in the project in an interdisciplinary context. The time frame of the analysis extended from the 1980s to the Peaceful Revolution of 1989, but explicitly included the transformation period thereafter until about the year 2000, because some concepts and models of thought from the GDR period continued to have an impact on the legislation of urban heritage protection in reunified Germany.

The volume was edited by a total of seven project participants, including not only those responsible for the project, but also research assistants; among them Harald Engler from the IRS, who also co-authored the introduction to the volume as well as analysing the contemporary historical background for the two decades before and after 1989 for the first topic area "Politik und Stadtproduktion" (Politics and City-Production). In his contribution to this thematic area, Andreas Butter of the IRS examines professional reform approaches effective in GDR times on the basis of guiding principles and patterns of action in contributions to the journal "Architektur der DDR". A central contribution to the volume was made for the IRS by Julia Wigger, who analyses civic engagement and protest for the historic building fabric, and Sarah Day, who presents the interactive website for the urban turnaround project (https://stadtwende.de/). Other contributions deal, among other things, with various strategies of preservation, the Leipzig People's Building Conference, the implementation of preservation strategies in the teaching of architecture at universities, the German-German exchange and its effects in this field, as well as various case studies. Overall, the volume sheds light on a topic in the history of the GDR and East Germany that had not been researched in this depth and empirical breadth until now and thus makes an important contribution to the peaceful revolution and the history of transformation.