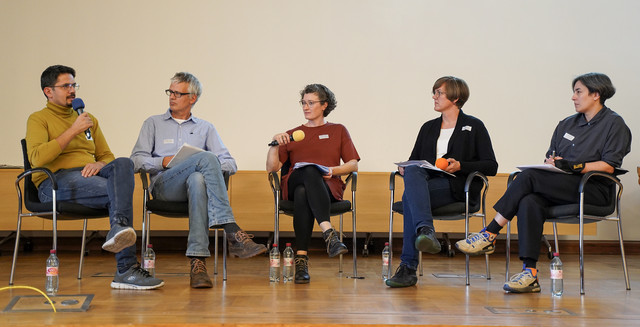 On 19 September 2022, the symposium and final conference on the BMBF-funded research project "From Shrinkage to Immigration. New Perspectives for Peripheral Large Housing Estates", or "StadtumMig" for short, took place in Berlin. Together with the Institute for Ecological Urban and Regional Development (IÖR) in Dresden, the Berlin Institute for Empirical Integration and Migration Research (BIM) and the B.B.S.M. Brandenburgische Beratungsgesellschaft für Stadterneuerung und Modernisierung mbH, the IRS had investigated local integration policies, open space development, the need for adaptation of the social infrastructure, the prospects for people to stay and the opening of urban societies to newly arrived refugees in large housing estates in eastern Germany. The project has now entered a two-year implementation and continuation phase. You can read about the "StadtumMig" project's first results in the June issue  (1/2022) of our magazine IRS aktuell.

The final conference in the main building of Humboldt-Universität zu Berlin brought together researchers from the institutes involved in the project, external academics and committed people from civil society initiatives. Heike Hanhörster from the Institute for Regional and Urban Development Research (ILS) in Dortmund kicked off the conference with a lecture on the emergence and function of arrival neighbourhoods. Hanhörster presented food for thought on how the diffuse yet ever-present concepts of "stability" and "mixture" could be re-examined and re-established in arrival neighbourhoods. She presented selected findings from her recently published study "How to identify and typify arrival spaces in European cities-A methodological approach".

IRS researcher Madlen Pilz from the Research Area Policy and Planning, together with Maren Jakobi, integration commissioner of the state capital Schwerin, highlighted the differences within the integration policy structuring of the cities of Halle (Saale), Cottbus and Schwerin and used individual case studies to illustrate the difficulties and challenges of putting scientific findings into practice at the municipal policy level.

This was followed by the presentation by Katja Friedrich from the Leibniz Institute for Ecological Urban and Regional Development (IÖR) in Dresden and Maike Fraas, professor at the Hochschule der Bildenden Künste Saar in Saarbrücken. Together they presented approaches for creatively appropriating and revitalising public and partly public space. Examples of this were presented in the form of exhibitions, archives and workshops from the project "Stadt.Raum.Wandel" (City.Space.Change) in order to convey a specifically participatory approach to shaping living conditions. Fraas emphasised that vacant housing stock, commercial and green spaces in particular would gain a new perspective of use through immigration.

After a lunch break with an Arabic-inspired street food buffet by the catering company refueat, Nihad El-Kayed from the Berlin Institute for Empirical Integration and Migration Research (BIM) spoke about structural racism and discrimination experienced by people with a migration background in the German housing market. Together with two members of the Geflüchteten Netzwerk Cottbus e.V. (Cottbus Refugee Network), El-Kayed highlighted the importance of multilingual support and local social infrastructure, which are sometimes hardly available or not available at all, especially in arrival neighbourhoods.

Matthias Bernt, who is responsible for the coordination of the "StadtumMig" network, focused via live link and together with Christiane Droste, coordinator of the Fachstelle gegen Diskriminierung auf dem Wohnungsmarkt and project manager of UP19 Stadtforschung + Beratung GmbH, on the different types of housing companies that play a central role in the composition of the residents in large housing estates due to their different motives.

In the concluding panel discussion, moderated by Anne Volkmann from the Brandenburgische Beratungsgesellschaft für Stadterneuerung und Modernisierung (B.B.M.S) in Potsdam, the question was discussed from the perspectives of science, education, politics and the voluntary sector as to how the presented challenges of large-scale housing estates in eastern Germany and their neighbourhood developments could be jointly tackled and overcome in the future.

In October 2022, the two-year implementation and stabilisation phase of the project network began. The implementation of specific results from the research into the working practice of the partners from the municipal administrations and civil society organisations will be accompanied. A handbook for municipal practice will be published soon.