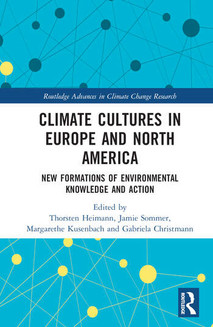 Climate change is not perceived, understood and evaluated in the same way everywhere. Accordingly, the practices of dealing with it differ considerably. Today, such climate-cultural differences are found less between nation states than between different groups of actors and socio-political coalitions. A new anthology edited by Thorsten Heimann, Jamie Sommer, Margarethe Kusenbach and Gabriela Christmann focuses on such "climate cultural formations" as well as their great diversity in North America and Europe: from cultures of climate adaptation in rural areas of Southern Europe and among the indigenous population of Northern Europe to culture-specific strategies for more climate protection in German cities or in the southern states of the USA.

At the end of July 2022, the anthology "Climate Cultures in Europe and North America. New Formations of Environmental Knowledge and Action" by Routledge. Among the editors are Thorsten Heimann, a former IRS researcher and consultant for "Green Culture" at the Federal Government Commissioner for Culture and the Media, and Gabriela Christmann, an IRS research group leader and sociology professor at the Technical University of Berlin. With Margarethe Kusenbach (Professor of Sociology at the University of South Florida) and Jamie Sommer (Assistant Professor and Environmental Sociologist also at USF), the team includes two distinguished US researchers. A central point of reference for the volume is the relational cultural space concept developed by Thorsten Heimann as part of his dissertation for the study of climate cultures, which was also published by Routledge under the title "Culture, Space and Climate Change - Vulnerability and Resilience in European Coastal Areas". Heimann asked how climate cultures, i.e. specific patterns of perception, interpretation and evaluation of climate change, can be spatially located if the frequently cited thesis of globalisation theory that nation states have lost their cultural binding force is true. The result is a concept that focuses on actors, groups, their shared knowledge and preferred practices - so-called climate-cultural formations - as well as their spatial manifestations on a local to global level.

The new volume now provides an overview of climate-cultural formations in Europe and North America. In addition to three conceptual contributions, it brings together seven empirical contributions by authors from the world regions studied, which not only show the diversity of climate cultures, but also diverse methodological and disciplinary approaches. For example, Sarah Kessler and Henrike Rau, geographers at the Ludwig-Maximilians-Universität in Munich, undertook a media analysis to differentiate climate change debates in the German-speaking world in terms of climate culture. Klemetti Näkkäläjärvi (Cultural Anthropology), Suvi Juntunen and Jouni J. K. Jaakkola (Public Health, all University of Oulu) ethnographically studied climate perceptions and adaptation practices of Saami communities in northern Finland who live from reindeer herding. David Zeller, a sociologist at the University of Tampa, used online observations to highlight debates about the evaluation of geoengineering approaches within the American environmental movement.

The aim of the volume was to capture the diversity of existing formations - also under the impression prevailing at the beginning of the work that a transnational new-right front was forming in the "West", whose political programme includes an explicit denial of climate change. The threatening perception was to be contrasted with well-founded empiricism. Some of the contributions even go beyond this goal. Julia Teebken, a political and social scientist at the Free University of Berlin, uses the example of climate protection efforts in the southern US state of Georgia to shed light on what happens when different climate-cultural formations meet in conflict. The strategies of climate activists in their confrontation with the conservative majority milieu, which is hostile to climate protection, include, for example, the communicative reframing of the issue from "climate protection" to "innovation" and "technology development". Thus, the anthology also builds a bridge from the static description of climate cultures to dynamic negotiations between them.