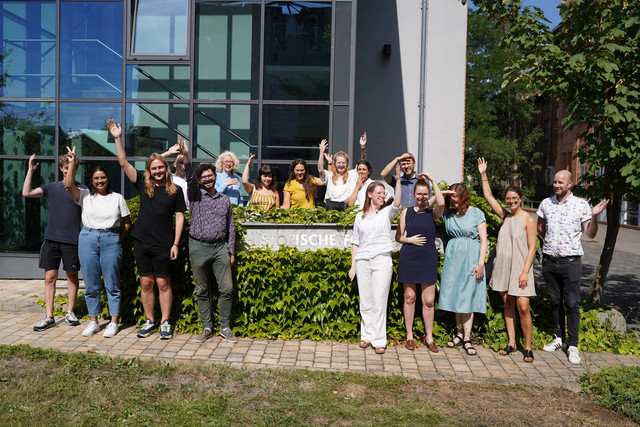 The five-day summer school "The Socialist City: Planning, Transformation and Aftermath" at the beginning of August 2022 dealt with matters of urban planning and housing construction from a comparative perspective. Participants discussed both urban planning and housing policy issues in the context of the Soviet Union, Poland, Yugoslavia and with counter-examples from France. Excursions in former East Berlin to the focal points of urban planning and architecture in Karl-Marx-Allee (former Stalinallee), monument protection (Nikolaiviertel and Gendarmenmarkt) and state surveillance (Hochschönhausen) gave the researchers additional insights into the topic.Towards the end, the eleven summer school guests discussed the umbrella topic of post-socialism using the examples of Ukraine and the Federal Republic of Germany. Some students received feedback on presented projects from the plenum.

Immediately following the opening on 1 August by IRS Director Oliver Ibert, there was an introductory lecture by Christoph Bernhardt, head of the IRS research focus on contemporary history and archives. Bernhardt went into the origins of the concept of the socialist city in the pre-war Soviet Union as well as some aspects of its implementation in the GDR and addressed different experiences and paths in East German cities. On the second day, the lectures and discussions focused on urban planning in the Soviet Union (Daria Bocharnikova, Katholieke Universiteit Leuven), Poland (Piotr Kisiel IRS), Romania and Yugoslavia (Gruia Bădescu, University of Konstanz) and France (Daniel Hadwiger, IRS). The special insight interest of this day was on the diversity of urban design. For example, the urban redesign programme in the then Romania under Ceaușescu surprisingly had no equivalent in the Soviet Union or Poland. In addition, the experts present discussed the role of war destruction and reconstruction. They also discussed the question of the extent to which the socialist city can be considered a variant of modernist urban planning.

Using the example of the Royal Palace in Budapest, student Helka Dzsascovszki (Technical University of Munich) argued how urban archaeology and historicising architecture should be considered as part of the landscape of socialism, rather than limiting it solely to housing estates. Ivana Zimbrek (Central European University Vienna) showed how department stores were conceived and executed in socialist Yugoslavia. She explained that they were an important platform for East-West knowledge transfer as well as a forum in which architects could work.

On the third day, the Summer School continued to focus on housing situations in the Soviet Union (Natalia Otrishchenko, Centre for Urban History Lviv), Poland (Barbara Klich-Kluczewska, Jagiellonian University Krakow), Yugoslavia (Rory Archer, University of Graz) and France (Kenny Cupers, University of Basel). The focus here was on mass housing programmes in the Soviet Union, Poland and France. It became clear how these stood in stark contrast to Yugoslavia, where single-family houses rather than prefabricated housing dominated residential landscapes. The role of housing as an instrument of family policy was addressed, as was the contrast between housing estates and old tenement blocks. Erika Brandl (University of Bergen) finally examined whether and how Engel's housing question can still be relevant in discussions about the housing crisis.

Then came the excursions in former East Berlin. A group led by Andreas Butter (IRS) focused on the representative architecture of Karl-Marx-Allee and discussed different layers of GDR urbanism. The group led by Małgorzata Popiołek-Roßkamp (IRS) and Daniel Hadwiger (IRS), on the other hand, focused on the protection of historical monuments and the reconstruction of historical buildings during the SED regime. A group in Berlin-Hohenschönhausen, on the other hand, dealt there with aspects of the surveillance of East German cities by the Stasi and the many challenges that the built environment had posed in this context. This excursion was prepared and organised by Elke Stadelmann-Wenz (Berlin-Hohenschönhausen) and Gundula Pohl (Berlin-Hohenschönhausen) in collaboration with Emine Seda Kayim (University of Michigan, Ann Arbour). The summer school students dealt with how visible the socialist city still is in Berlin today and what can be interpreted as heritage in this context.

In the last part of the summer school, lectures by Harald Engler (IRS) and Natalia Otrishchenko (Centre for Urban History Lviv) illuminated aspects of the post-socialist city in Germany and Ukraine. With their closing impulses, they problematised in which contexts the term "post-socialist" can be useful and where its limits lie. In the end, the question arose for all participants as to whether socialist architecture should be evaluated on the basis of its own values or better in the context of authoritarian regimes in which they had emerged. 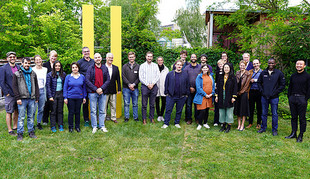 For the first time since the beginning of the COVID19 pandemic, the IRS Spring Academy took place again in Erkner and Berlin at the end of May 2022. The event series is aimed at international doctoral and post-doctoral researchers in the interdisciplinary field of spatial research. They get the opportunity to work intensively together on a topic, to exchange ideas across disciplines and to network. With its special mix of formats, the Spring Academy addresses the needs of researchers in the early stages of their careers. The theme of the Spring Academy 2022 was "Spaces of Infection". The Robert Koch Institute was the local partner. more info