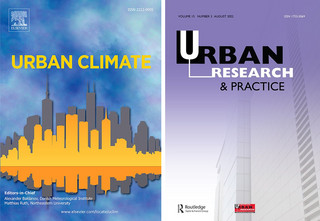 Two new articles from the Research Group Urban Sustainability Transformations shed light on how cities are becoming forerunners in climate policy, both in climate protection and in climate adaptation. Instead of the metropolises often mentioned in this role, such as Paris, the authors take a look at smaller cities in Germany. In doing so, they show that even cities with difficult starting conditions can find their way into the top group.

Cities cause about 70 % of greenhouse gas emissions worldwide - through traffic, industry, construction activity and the heating and cooling of buildings. At the same time, they are particularly affected by climate change: Heat waves, heavy rain and storms cause severe damage to property in them and endanger the health of the urban population, even leading to deaths. For almost 30 years, some cities have therefore been committed to climate protection. They reduce greenhouse gas emissions by, for example, expanding electric mobility, cycle paths and public transport or promoting building modernisation. In the face of increasingly extreme weather events, climate change adaptation measures have been added more recently, such as land unsealing, urban and building greening to promote natural cooling and infiltration.

Cities that have adopted climate policies earlier and, above all, more ambitiously than other cities are also referred to as forerunners. Such forerunners can be further subdivided into "pioneers" and "leaders". "Pioneers" primarily pursue internal ambitions, such as the proclamation of ambitious climate targets, the creation of comprehensive concepts or the institutional anchoring of climate policy in the city administration processes. In the case of leaders, such internal ambitions are complemented by external ambitions aimed at increasing the visibility of the city's work nationally and internationally. Leaders are therefore often very active in international networks, receive awards for their climate and sustainability policies and, to a certain extent, present themselves as role models.

Initially, it was particularly wealthy European metropolises such as Amsterdam, Stockholm, Copenhagen and Paris that pursued an ambitious and high-profile transformation policy and can be described as "leaders" of the first hour. This gave them a lot of visibility on the world stage, for example as venues for climate summits and as namesakes for treaties such as the Paris Agreement. But what about the big cities in the second tier, what about smaller, poorer or old industrial cities? What options are there for these cities, which receive much less attention than the large international metropolises? Researchers from the Urban Sustainability Transformations Research Group explored these questions in two recent publications.

In the article "From Climate Policy Pioneers to Climate Policy Leaders? The Examples of the Eastern German Cities of Potsdam and Rostock", published in the journal Urban Research and Practice, Wolfgang Haupt, Janne Irmisch and Kristine Kern examine how the cities of Potsdam and Rostock have succeeded in becoming climate pioneers and discuss whether both have the potential to become leaders. Most of the "pioneers" and especially "leaders" in Germany and internationally are larger cities or metropolises and rarely smaller cities like Potsdam and Rostock. Although Potsdam and Rostock are located in federal states that have so far acted rather cautiously in the field of climate policy (e.g. regarding the promotion of municipal climate policy), both have been pursuing ambitious climate policies for several decades. The analysis of the IRS researchers shows that numerous socio-economic and socio-demographic factors within the cities have favoured the success of both cities. These include, in particular, a growing, comparatively young population, favourable economic conditions, political influence of green parties, a strong civil society and, last but not least, a supportive local research environment.

Despite numerous successes - such as the development of comprehensive and ambitious climate protection and climate adaptation concepts as well as the successful institutionalisation of climate policy within the city administration - neither city has yet succeeded in making the leap from "pioneer" to "leader". The main reason for this was the lack of (continuous) support from the city leadership, especially from the mayors. However, this would have been necessary in order to formulate external ambitions and represent them to the outside world. Nevertheless, both cities have the potential to become national or even international leaders. Potsdam, for example, has proven expertise and experience in the energetic renovation and greening of GDR prefabricated housing estates and their prospective conversion into climate-neutral neighbourhoods. With this background, the city could become a model for other post-socialist cities that also have a larger stock of (municipal) prefabricated housing estates. In Rostock, there have been far-reaching ambitions formulated by the city leadership since 2019 to transform the city into a cycling city. If these ambitions can be realised in the next few years, Rostock could position itself as a "leader" in this area. To this end, the city could use the international networks it has cultivated over decades, especially with cities in the Baltic Sea region.

The article "Explaining Climate Policy Pathways of Unlikely City Pioneers: The Case of the German City of Remscheid", recently published by Urban Climate, highlights the climate policy of the pioneering city of Remscheid in North Rhine-Westphalia. Numerous studies on urban climate policy suggest that pioneers such as Potsdam and Rostock typically have many favourable socio-economic and socio-demographic conditions. Surprisingly, the initial conditions for Remscheid were not positive - quite the opposite. And yet it turns out that the industrial city in transition became active in climate policy much earlier and remained active permanently than most other German cities of comparable size. In an explorative and comprehensive case study, Wolfgang Haupt and Kristine Kern examine Remscheid's climate policy development path since the early 1990s. Despite limited financial resources, Remscheid performs significantly better than many other German cities because the lack of capacities can be compensated by strong key actors. For example, a few employees of the city administration succeeded in acquiring external funding from a variety of sources. These funds were used, for example, to finance the preparation of strategy documents (e.g. climate protection and climate adaptation concepts), but also the implementation of smaller measures (e.g. greening facades), as well as the development of important knowledge and decision-making bases (e.g. heavy rainfall hazard map). However, it also became apparent that the planning uncertainty resulting from the rather short-term thinking from externally funded project to externally funded project has a negative impact on the definition of long-term climate goals and the development of a holistic vision of the future. However, there is a clear need for more studies on cities that have managed to become climate pioneers even under unfavourable conditions. Models of such atypical or unlikely pioneers - also referred to as "Unlikely Pioneers" in English-language literature - need to be made visible and accessible to cities operating under similar conditions.

Wolfgang Haupt, Kristine Kern, and Janne Irmisch conducted the research for these two publications as part of two third-party funded projects. Firstly, through the BMBF-funded transdisciplinary project "Urban Resilience to Extreme Weather Events - Typologies and Transfer of Adaptation Strategies in Small Large and Medium-Sized Cities (ExTrass)". Secondly, on the international comparative project "Matching Forerunner Cities" (MaFoCi), which was funded by the Turku Urban Research Programme. Both articles are also part of Wolfgang Haupt's cumulative habilitation project at the Department of Regional Planning at the Brandenburg University of Technology Cottbus-Senftenberg.