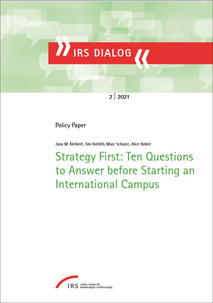 Universities are increasingly investing in offshore locations, partly to generate revenue in the form of tuition fees, partly to achieve reputational gains. There are currently almost 500 offshore campuses worldwide. At the same time, campuses are also being closed every year. The Junior Research Group TRANSEDU, headed by Jana Kleibert, investigates the internationalisation strategies of universities. Under the title "Strategy First: Ten Questions to Answer before Starting an International Campus", Jana Kleibert, Tim Rottleb, Marc Schulze and Alice Bobée have now presented a policy paper that addresses university leaders and political decision-makers and analyses the risks of international campus developments.

Several cases of failed investments have been prominently featured in the news. For example the University of New South Wales pulled out of Singapore only four months after opening a campus there. The reasons for such campus closures are varied. Some were planned from the beginning with a limited time frame. In addition, the group's research shows that some overseas campus projects were planned but cancelled before they began operations. Such "ghost campuses" lead to financial and reputational losses for universities. And it is possible that the visible closures are only the tip of the iceberg, while many other projects continue to run at a loss. The development of offshore campuses as a particular form of internationalisation of higher education can be accompanied by far-reaching difficulties. In research on higher education, they are not least regarded as a risky growth strategy.

Based on 136 interviews conducted with senior higher education managers and transnational education actors in Europe, Southeast Asia and the Arabian Gulf region, the TRANSEDU research group analyses the six main risks associated with offshore campus projects. These include a lack of institutional strategy, financial and reputational risks, as well as risks related to peripheral locations, risky partnerships and changing regulations in the host country. The policy paper concludes with a checklist of ten questions that leaders should ask themselves before establishing a branch campus. It was published in the IRS's own IRS Dialog series.