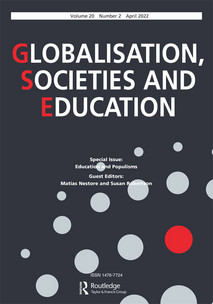 In their newly published article "Choose France! Containment, Circulation and Postcolonial (Dis)Continuities in Transnational Education", Alice Bobée and Jana Kleibert show how French offshore campuses in Francophone Africa on the one hand implement French migration and higher education policies and on the other hand increasingly adapt to economic competitive pressure and the mobility desires of paying students. In doing so, they are imitating "Anglo-Saxon" market-oriented strategies. The article appeared in the journal Globalisation, Societies and Education.

The paper explores how the offshore campuses of French business and engineering universities in Africa are interwoven with the French state's postcolonial project of maintaining its influence over Africa while restricting immigration to France. In contrast to the French public universities, which are integrated into the "French-foreign university cooperation" funded by the French Ministry of Foreign Affairs and the French Development Agency, the campus branches of the business and engineering schools are financed and run by private institutions themselves. The analysis shows the increasing importance of a market-oriented logic in the strategies of these institutions in the Maghreb countries, West and Central Africa. French offshore campuses are intertwined with French higher education and migration policies, but their strategies do not necessarily align with the French state's policy intentions to filter immigration and strengthen a sphere of French influence. In particular, the authors illustrate how French universities have shifted their branch campus strategies in recent years: from the idea of offering an "alternative to migration" to the development of programmes promoting various (trans)continental mobilities. These changing strategies show that French offshore campuses are increasingly adapting to the competitive pressures of a globalised higher education market and to the mobility desires of paying African students, indicating an increasing orientation towards market-oriented, "Anglo-Saxon" strategies.