Over several years, the research department "Dynamics of Communication, Knowledge and Spatial Development" has been researching how social innovations are driven in rural areas, what problems they can solve and how they can be supported politically. Now it is publishing recommendations for practice; on the one hand in the form of a German-language policy paper, on the other hand in the form of an English-language practice manual.

When the market and the state in rural areas cannot guarantee an adequate supply of education, retail offers, health services, mobility and other important goods, or when conventional models of economic activity cannot generate satisfactory incomes, social innovations and social enterprises often offer an alternative. They combine economic value creation and non-profit orientation to create new business and supply models. Social innovations in rural areas are not a new topic for the research department. Under the leadership of Gabriela Christmann, it compared social enterprises in several European countries (EU project "RurInno", 2016 - 2018), followed the emergence of social innovations in German rural communities (lead project "Innovations in Rural Municipalities", 2015 - 2018), organised joint learning with European social enterprises and scientific institutions (EU Innovative Training Network "RurAction", 2018 - 2021) and recorded the activities and funding needs of Brandenburg social enterprises (study "Marktorientierte Sozialunternehmen in Brandenburg" or "Market-oriented Social Enterprises in Brandenburg" commissioned by the Ministry of Economy, Labour and Energy).

The policy paper „Wie man soziale Innovationen in strukturschwachen ländlichen Räumen befördern kann" (How to promote social innovations in structurally weak rural areas), which appeared in the IRS's own series IRS Dialog (5/2020), is aimed at practitioners in state and federal politics as well as in rural regions and municipalities. It shows that social innovations unfold in phases, gradually becoming more concrete until they can finally spread beyond their place of origin. The crucial point here is that innovations can also fail in each phase or become temporarily inactive and thus require appropriate support in each phase accordingly. Financial support is only one possibility - coaching for local key persons can also contribute significantly to the success of an innovative initiative. Accordingly, the paper lists material and immaterial measures to support social innovations for each innovation phase and also differentiates between the responsibilities of different administrative levels in the federal system.

The handbook "Social Enterprises in Structurally Weak Rural Regions: Innovative Troubleshooters in Action" summarises findings from the ITN RurAction. It is part of the project's communication strategy and is aimed at the target group of social enterprises, but also at other practitioners engaged in problem solving in the context of structurally weak rural regions. The main objective of the handbook is to support practitioners in reflecting more consciously on the conditions in rural areas with their specific challenges, potentials, dynamics and forms of organisation and to better understand the role of social enterprises and social innovations. What are helpful and hindering factors in the emergence and spatial spread of social innovations? How do they influence their actions? The handbook provides extensive background and context and is thus not intended as a toolbox with a list of recommendations. 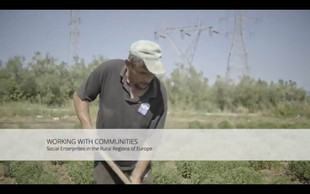 For a long time, rural areas were considered culturally detached and economically unattractive, but this bad image is losing its force. Research in the spatial and social sciences is now increasingly interested in the innovative power of rural areas and rural entrepreneurship. The EU project RurAction looked at social enterprises in rural areas and the social innovations they generate to address typical rural problems. An international web conference and a web policy roundtable held in September of 2020 discussed new scientific findings as well as recommendations for policy makers and practitioners on the ground. more info