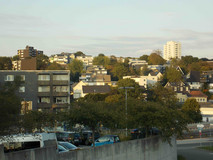 Since 2018, the ExTrass project of the IRS research group Urban Sustainability Transformations has been researching how active German cities – especially medium-sized cities and smaller large cities – are in climate policy: What they are doing to adapt to increasing extreme weather events, but also to reduce their greenhouse gas emissions. In cooperation with the University of Potsdam and other partners, the team developed both a quantitative overview and detailed qualitative case studies. Now a two-year transfer phase has begun, in which the ExTrass research results will be translated even more strongly into recommendations for planning and municipal policy practice.

Cities are major emitters of greenhouse gases and at the same time strongly affected by the consequences of climate change, such as heavy rainfall events and heat waves. In the research and development phase of the joint project "Urban Resilience to Extreme Weather Events - Typologies and Transfer of Adaptation Strategies in Small and Medium-Sized Cities", or "ExTrass" for short, the IRS, in cooperation with the University of Potsdam (which coordinated the project), Adelphi Research gGmbH, Johanniter-Unfall-Hilfe e.V. and the cities of Potsdam, Remscheid and Würzburg, therefore focused on climate adaptation and climate protection measures and strategies in cities.

A major goal of the project was to expand the focus on large metropolises that had prevailed until then and to include the "second-tier" large cities as well as medium-sized urban municipalities in the analysis. In 2021, the project team published a ranking of all cities considered (104 in total), which for the first time looked at climate protection and climate adaptation activities in a differentiated and combined manner. In addition, detailed case studies ("path analyses") on the development of local climate action approaches were prepared for the three partner cities and 17 other cities. It was found that it is still mainly the larger cities that are active in climate policy, although some medium-sized cities are also among the champions. Climate policy orientation is particularly difficult for old industrial cities and for smaller, financially weaker municipalities that simply cannot afford permanent structures for climate-related action.

At the beginning of 2022, the two-year transfer phase of the ExTrass network began under the name "Future City: Urban Resilience to Extreme Weather Events - Consolidating Typologies and Transfer of Adaptation Strategies in Small and Medium-Sized Cities", or "ExTrass-V" for short. Under the leadership of Wolfgang Haupt, this phase will improve the data base, especially on climate policy activities in smaller cities, and will translate findings into local practice in the municipalities. Among other things, the new project will record transfer organisations, channels and mechanisms for climate protection and adaptation in Germany and expand the aforementioned ranking into a nationwide monitoring of climate protection and adaptation. ExTrass-V has also set out to develop, test and evaluate a web-based resilience tool that city administrations can use on their own, free of charge and on an ongoing basis to run a process for strengthening climate resilience for their city or individual city districts.  Up to now, this has usually only been achieved at higher cost or with the help of external consultancy, with the result that medium-sized and smaller cities in particular are lagging behind in climate adaptation.

ExTrass-V, like its predecessor project ExTrass, is funded by the Federal Ministry for Education and Research (BMBF) as part of the Research for Sustainable Development (FONA) programme.