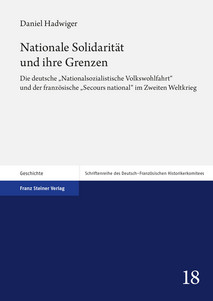 At the end of 2021, the Franco-German Historians Committee awarded the dissertation prize to historian Daniel Hadwiger, a researcher at the IRS, for his study “Nationale Solidarität und ihre Grenzen. Die deutsche Nationalsozialistische Volkswohlfahrt und der französische Secours national im Zweiten Weltkrieg“ (“National Solidarity and its Borders. The German National Socialist People's Welfare and the French Secours national in the Second World War”). In the presence of the Board of the Historians Committee, the Director of the Centre Marc Bloch, Prof. Jakob Vogel, and the representative of the Science Department of the French Embassy in Berlin, Dr. Bernard Ludwig, the prize was ceremoniously awarded at the Centre Marc Bloch on 18 November 2021.

Every two years, the Franco-German Historians Committee awards outstanding dissertations that deal with the history of Germany and France in the 19th and 20th centuries. The study was published in June 2021 by Steiner Verlag in the series of the Committee. It examines the political instrumentalisation of welfare during the Second World War.

The most important welfare organisations in Germany and France during the Second World War serve as examples: the National Socialist People's Welfare Organisation (NSV) and the Secours national. NSV and Secours national provided care for the civilian population in extraordinary crises during the war. At the same time, both welfare organisations acted on behalf of the Nazi state and the Vichy regime respectively. They implemented their anti-communist, anti-Semitic and family-promoting measures in their welfare work. Therefore, in addition to their care function, their monitoring and propaganda function in favour of the Nazi state and the Vichy regime was central. The study compares how the challenges of wartime welfare were met by the NSV and the Secours national within their respective national contexts. It also asks about the mutual influence of the two organisations. The fact that the Second World War was not only fought with weapons, but also with welfare organisations – for population, territories and competing models of order – is shown particularly vividly by the NSV and Secours national.

The study, based on sources from around 50 archives in various European countries, sees itself as a contribution to a transnational history of National Socialism. As an analysis that compares the Nazi state and the Vichy regime and pays attention to the transfers between the countries, it is also a history of the staging of the nation and forced contacts. Full of contradictory actors, it reminds us to differentiate and not to write a clear black or white history, but rather a grey history.